4k is a hot topic in the techy world. It delivers image quality that hasn’t been seen before in most households and the buzz is growing as 4k TV sets are now available from most of the major TV manufacturers.

People are particularly excited about seeing sports on 4k displays, as most people remember the first time they had the eye-opening experience of watching sports on HD. The 4k viewing experience promises to have a similar - if not better - effect. Maybe that is why 4k is predicted to be adopted at a faster rate than HD, as this chart from Business Insider shows: 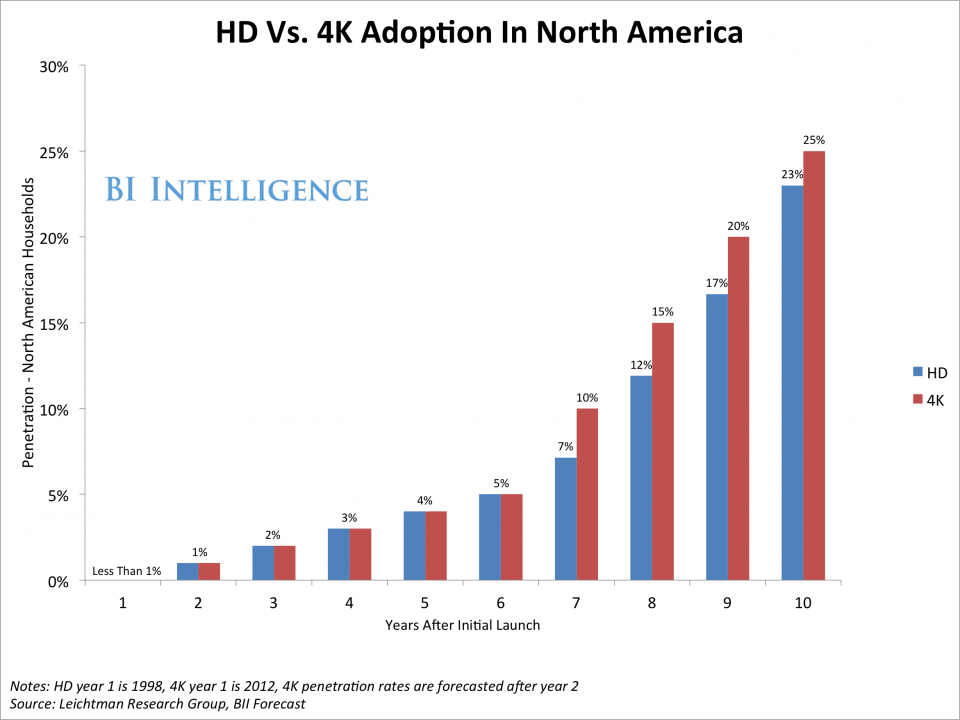 Broadcasters, particularly in Europe, are starting to use 4k (also referred to as Ultra HD) cameras to film sporting events. As an article in Forbes recently reported -

First up, as reported by SVGEurope, we had France Télévisions not only filming every match on the Central Court of the French Open tennis tournament at Roland Garros in 4K UHD but also broadcasting this footage via both terrestrial and satellite channels, so that any French homes with 4K TVs could receive it.

Then on May 30th, as reported by broadbandtvnews, German broadcaster Sky Deutschland broadcast the final game of its 2015 domestic football (soccer) season in Ultra HD to Samsung TVs installed in a selection of 15 or so sports bars. This match was filmed using 11 Ultra HD cameras with real-time HEVC encoding at 35Mbps and a 50Hz frame rate.

The biggest 4K UHD sports announcement of the past six weeks, though, came out of the UK, as broadcasting and communications giant BT announced that it was going to launch a 4K sports channel, BT Sport Ultra HD, in August, ready to show 4K footage from Champions League and Premier League Soccer as well as top-level rugby matches. The channel will be streamed over BT’s fibre network to a new, as yet unreleased receiver box, with pricing yet to be announced.

Even though the word “streamed” was used to describe what BT is doing, each of the above situations involved the broadcasting of events. What about the actual streaming of live sporting events in 4k? Well, a 4k image has about four times more pixels than a 1080p image so that means four times more data has to be delivered. So it is to no one’s surprise that early tests have shown bandwidth is a big issue. As reported by TechRadar

However, the BBC's recent live Ultra HD trials during the World Cup and the Commonwealth Games have highlighted an inconvenient truth: live sports coverage is a bandwidthosaurus.

During the World Cup, the BBC needed 36Mbps to stream 2160p UHD resolution at 60 frames per second. At some point in the future, an engineer speculated that this might drop to 25Mbps.

That compares to just 15.6Mbps currently used by Netflix for the Ultra HD content on its nascent streaming service. Meanwhile, the UK's average broadband speed is 17.8Mbps but that Ofcom [UK’s Office of Communications, a regulatory body supervising the communications industry].
number is worked out using quoted speeds, not actual ones.

Currently, the industry is having a hard time streaming live sporting events in a non-4k format, as we described in an earlier blog post. So to do it in 4k, the industry will need to think “out of the box.” There are some who believe that satellite will be the only way to effectively broadcast 4k live sporting events. At Peer5, we believe a hybrid CDN model that combines a peer-to-peer delivery layer with a server backend can handle the task. And there are other possible approaches.

Ultimately, while the promise of streaming live sports in 4k is great, it will not be trivial to put systems in place that can handle the bandwidth and deliver a high-quality viewing experience. Broadcasters who want to be among the leaders in this area need to evaluate their options soon or they will potentially get left behind.

Peer5 enables the streaming of live video content. With a unique hybrid approach that combines a secure peer-to-peer delivery layer with an HTTP server-based backend, the Peer5 CDN solution lets content providers deliver an issue-free streaming experience to users, with much lower infrastructure requirements than traditional CDN offerings. Try out the Peer5 solution by registering Peer5.

We are thrilled to announce that Peer5 has been acquired by Microsoft. It has been quite a journey and I’m extremely proud of our team and what we’ve accomplished. Guy, Shachar and I started the company in 2012 with a vision to decentralize the web and video streaming

Learn how to use Peer5's range of analytics tools to keep tabs on your network and refine your corporate broadcasts.